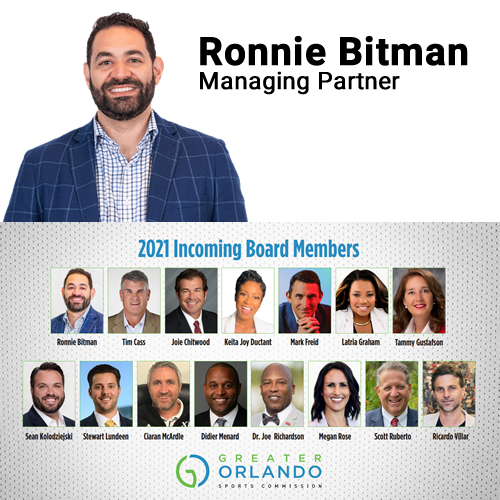 ORLANDO, Fla. (Dec. 15, 2020) – The Greater Orlando Sports Commission (GO Sports) has announced its 2021 officers as well as 15 incoming members to its Executive and Advisory Board of Directors. New incoming members will serve as the team that will help us continue to collaborate and bring innovative ideas and leadership to Greater Orlando. With their help, GO Sports will be able to expand our mission of bringing a robust calendar of sporting events to Central Florida. This team will provide vision, guidance and counsel when it comes to attracting and managing sports-related events, conferences and activities that are designed to drive positive economic developments and visitation to the greater Orlando area. They will also be laser-focused on marketing the destination that extends across the City of Orlando and Lake, Orange, Osceola and Seminole Counties.  “I am proud that this organization has been so successful in continually attracting and recruiting some of the most diverse, talented and respected individuals in our community to serve on the board of directors,” said Faron Kelley, Chairman of the Greater Orlando Sports Commission board and Vice President of ESPN Wide World of Sports, runDisney and Disney’s Water Parks. “We look forward to the contributions of this incoming group and are excited to work alongside them for many years to come.”  “We are proud to formally announce our 2021 officers and new members of our board of directors,” said Jason Siegel, President and CEO of the Greater Orlando Sports Commission.

For more information on GO Sports, its board members and the 2021 calendar of events, please visit GreaterOrlandoSports.com.

About Greater Orlando Sports Commission:
GO Sports is a private, non-profit organization established to attract and manage sports-related events, conferences and activities that drive positive economic development in the City of Orlando, Lake County, Orange County, Osceola County, and Seminole County. Founded in 1993, the organization has hosted or co-hosted more than 1,450 events in the Greater Orlando area with a total economic impact exceeding $1.9 billion in spending within the community. For more information, please visit GreaterOrlandoSports.com.